Splitting Zip files. WinZip ® makes it easy to create Zip files (.zip or.zipx) that are split into smaller pieces of a size that you specify. There are several reasons why you might want to do this, such as: To assist with large downloads. Some users may have difficulty downloading very large Zip files from web sites, FTP sites, etc. This article will show you how to use the free software 7zip to create multiple compressed folders in one go. This may come in handy for times when you are backing up your computer files or for whenever you need to compress a lot of file folders in general. This method involves using 7zip in a Windows batch file. To use the workflow, select a number of files (this workflow will not work with folders!) and then control-click on the selection. In the contextual menu, choose Automator » Zip individually (or whatever you named it). A new archive named 'filename.whatever.zip' will be created for each file in the selection.

for folders, try the -r option ..
zip -r '$f' $f'
from the man page -- a little confusing that the args are 'foo' and 'foo'. the first arg is turned into 'foo.zip' .. the second arg is the file spec (of files which will be placed into the .zip)
~~~
To zip up an entire directory, the command:
zip -r foo foo
creates the archive foo.zip, containing all the files and direc-
tories in the directory foo that is contained within the current
directory.
~~~

Mac Zip Multiple Files At Once

Never mind.
I just tried the script for individual files with folders selected and it work just the same (~/foo/bar with foo selected become ~/foo.zip). Doh!

Okay, one last thing... ;)
When I zip a folder with this script, let's say /foo from the Desktop level (~/Desktop/foo),
everything is working fine, i.e. it gives me a file named foo.zip at the same level as my original /foo folder (~/Desktop/foo).
The problem is when I unzip it. I end up with nested folders, i.e. /Users/MyUserName/Desktop/foo on the ~/Desktop folder. Is there a way to not include all those (almost empty) folders in the script?
The idea would be to make the script behave just like the 'Create Archive of...' in the contextual menu

The Automator workflow One Zipper does the same thing, but uses the cleaner 'xargs'. It's saved as a droplet, but can easily be converted to use as a contextual menu item.

IMHO it is better to just throw them in a folder and zip the folder. It's my pet peeve when a bunch of files unzip and end up all over the place as individual files. I'd rather unzip them into a nice folder.

using filetests to zip both files and directories transparently

Sorry, does not seem to work. Added .zip to two places and it would partially work.
However, what would be nice is to have the workflow go like this:
Set up: single file on desktop, folder on desktop with some files in it and another folder in it with some more file (i.e. a level 2)
Now, results: run the work flow and have it zip the single file. Next, it would zip the folder and the subfolder. This does not happen now - no second level.
Also, would like to stip the path out of the zip file just to the folder level. For the single file a -j seems to work. However, how do you get the file path to just start at the folder being zipped, not at the user/desktop/etc level when unzipping?
Can this be done?

I would love it if this action worked, it would be perfect as i agree, i would like the extra compression afforded by it, however it simply does not work. . . do you think you could go over exactly what i should do in the automator terminal? as in should it be '/bin/bash' and 'asas arguments' ? also i copied your code exactly and pasted it in the script box, perhaps i was supposed to do something else as well? thanks.

So many years have gone by and I still haven't found any better script to what our script does!
There is only one problem, when applied through Automator (on 10.6.8 or 10.5) is crashes after it compresses the 1st folder. Do you any idea why or if there is anything one can do to avoid this problem?

Chas, you are missing the point.
Let's say you have a game emulator and you have 1500 roms. The emulator accepts .zip and if you zip all of the roms you save a significant amount of space.
Zipping all of the files into a single zip will not work as the emulator will probably only load the first file in the zip.
This hint is very useful for us emu geeks.

This seems to work, but it only works if you select an entire folder and run the automator scrpt from there, otherwise if you select individual files it actually searches each file for folders and zips the files within the 'package contents' : so workflow looks like this:
in the automator place action 'get selected finder items'
followed by 'get folder contents'
followed by 'run shell script' : keep the shell as /bin/bash and the pass input as 'to stdin' the actual script is
xargs -I {} zip {}.zip {}
that's it. save the workflow as a finder selection and select a folder full of files you wish to individually compress, and it works but yes unfortunately it still makes it have that annoying files structure, which i personally can't stand, and also it doesn't seem to like working with other folders within folders and it can't seem to compress .apps very well, lastly i would like to have the option to individually select groups of files from within a folder and zip those.i dunno what's up with that. so maybe someone can take this script and flesh it out? :)

thanks, useful tip.
does anyone know a way to get around the directory structure... at the moment i have to dump my folders in the root dir to avoid the problems unzipping.

Zip multiple files into individual archives via Automator- and use encryption 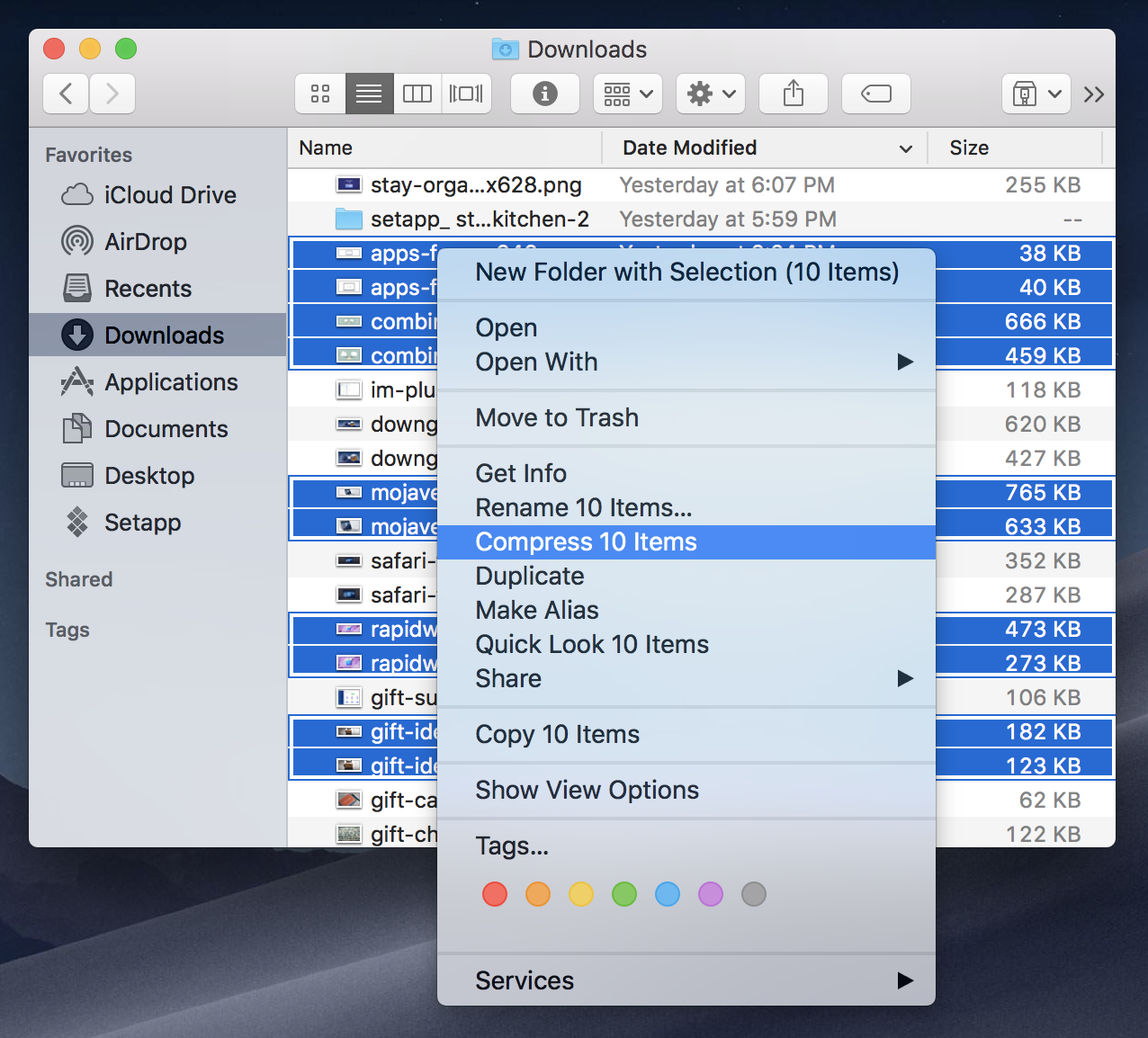 and what if you want to encrypt each file with the same password?
just adding the -e-argument fails for obvious reasons.. so how?

found this tip via Google. you have no idea how much time you just saved me.
i actually prefer using Terminal/Shell for zipping files...some people with older Windows systems seem to struggle with zip files made on a Mac and using the shell helps.

Zip multiple files into individual archives via Automator
will zip individual folders without the nested (absolute path) directory structure. Also, in Automator, make sure the 'Pass Input' pulldown is set to 'as arguments'.

This function is analogous to the AutoLISP getfiled function, however allows the user to select multiple files from several directories.

The user may select a directory using either the Browse button at the top of the dialog, or by entering a folder path into the Folder edit box; then proceed to browse the files and folders within that directory from the left-hand list pane.

The folder structure may be navigated from within the left-hand list pane by double-clicking on a listed folder, or on the parent folder symbol (..).

The parameters for this function are identical to those of the AutoLISP getfiled function, minus the bit-coded parameter.

The msg parameter specifies the dialog box label, i.e. the message that is displayed in the dialog title bar; if this parameter is nil or a null string (') is supplied, the title will default to 'Select Files'.

The def parameter specifies the default directory to be displayed in the left-hand list box when the dialog first appears; if either the supplied directory path does not exist, the parameter is nil, or a null string is given ('), the current directory (DWGPREFIX) will be used.

The ext parameter is a file extension filter specifying which files are to be displayed alongside folders in the left-hand list pane. As per the getfiled function, this parameter will accept wildcard patterns and multiple extensions are separated by a semi-colon (e.g. 'dwg;lsp' would display both .dwg and .lsp files). If this parameter is nil or a null string (') is supplied, '*' will be assumed and the function will display all files.